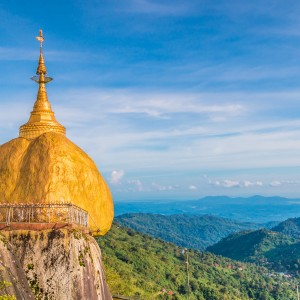 Myanmar is rich in natural resources such as arable land, forestry, minerals, as well as freshwater and marine resources, gems and jade.

Reasons to invest in Myanmar

Myanmar, a country that has high potential for rapid growth and development given its rich natural resources, abundant labour force, and strategic location is gradually embracing wide ranging reforms.

The government is deepening and broadening management while facilitating trade and foreign direct investment (FDI) and removing structural impediments to growth by establishing physical and social infrastructure, building legal and institutional frameworks, and developing banking and financial sectors; causing the upbeat of recent near-term Myanmar’s economy outlook and pick-up of FDI flow, making it one of the next rising stars in Asia.

The economy is expected to grow 5.5%1 in the fiscal year ending 31 March 2014 due to higher investment in hydropower, natural gas and oil and commodity exports. Almost all the sanctions against Myanmar have been either lifted or temporarily suspended by the EU, the US, Australia and Canada.

Forms of doing business in Myanmar

Under the new Foreign Investment Law, an investment may be carried out in any of the following forms:

The form of investment shall be as a company in accordance with the existing law. If it is formed as a joint venture, the ratio of foreign capital and citizen capital may be prescribed with the approval of both the foreigner and citizen making joint venture. In reviewing investments by foreigners, the Commission shall prescribe the minimum amount of investment required depending on the sector and the nature of the business, with the approval of the Union Government. The foreigner may, if a joint venture is carried out with a citizen in a prohibited and restricted business, propose the ration of the foreigner as prescribed by the rule. Under section 20 of the Foreign investment rules, the maximum foreign investment capital ratio shall not be more than 80% of the total investment amount for a joint venture for the above restricted and prohibited business sector.

are closed to private investment and can only be carried out by the government. The government, on a

case-by-case basis, may permit these activities to be carried out by any person or economic organisation, with or without a joint venture with the government and subject to unspecified conditions.

Registration of foreign investment under the MFIL involves the following steps:

A foreign company formed under the CA does not need to obtain an MIC permit, and is only required to apply for a permit to trade and then for registration with the CRO.

For companies registered under the MFIL, the minimum foreign share capital will be as determined by the MIC, based on its own discretion.

Registration fees on the incorporation of a company are MMK1,000,000.

Branch of a company incorporated outside Myanmar

A foreign company can also set up its branch office in Myanmar. A foreign branch formed under the CA does not need to obtain an MIC permit, and is only required to apply for a permit to trade and then for registration. The branch is allowed to be formed as a manufacturing or a services company (for instance oil companies are set up mostly in the form of branches).

In contrast, a foreign branch formed under the MFIL is required to obtain an MIC permit in addition to a permit to trade and a registration certificate. Registration fees on the registration of a branch are 1,000,000.

Representative office of a company incorporated outside Myanmar

Foreign investors can set up their business in the form of a joint venture, either as partnerships or limited companies, with any Myanmar partner (an individual, a private company, a cooperative society or a state-owned enterprise).

An extensive list has been issued by the MIC with regard to the type of foreign investments allowed in the form of joint ventures with Myanmar partners with minimum shareholdings of 20%, examples include construction related to development of rail/road links, manufacturing raw materials for drugs, etc.